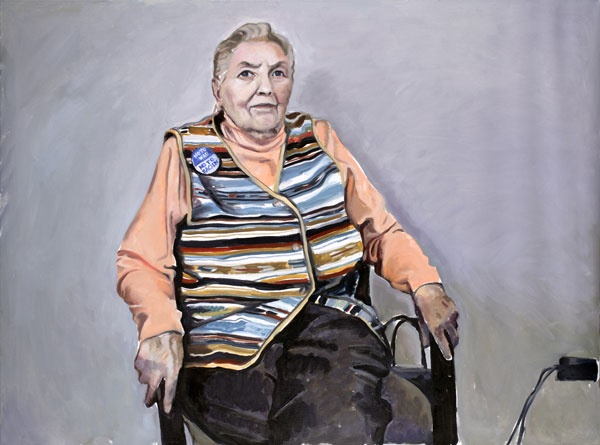 Bernice Diskin. "Born in Jersey City, New Jersey, in 1920. Graduated Grover Cleveland High School 1938. Went to work (two weeks after graduation) in a sweatshop for $11.88 a week -- 12 c out for Social Security -- for the rest of my life I worked in mainly low-skill office jobs -- except for last 10 years of working life, was a word processor. Long-time member of the Communist Party USA."

What's your view of the Soviet Union? - My one overall conclusion in the struggle to establish Socialism is that it can only be won through democratic forms. The word Socialism has to become firmly tied to the word democratic. As for the Soviet Union, I think far too little real democracy became the main cause for its downfall. I believe, many very good things were achieved and (just being there) was a major if not the major aid to peace in many parts of the world. But there were also many faults and even crimes. Surely, the continued (if not truly open) anti-Semitism was a major weakness. The jailing of so many who disagreed on one thing or another -- things that should have been discussed openly -- cut the feet from under the system. But, I also do believe it was extraordinary difficult to try to build Socialism with the rotten and deeply imperialistic role of the U.S.

What do you think of Mikhail Gorbachev? - I have mixed feelings here too. I think he played a very important role in exposing some of the faults and weaknesses of the Soviet government -- but I think it would have been wiser -- in order to preserve the Soviet Union -- to have gone slower in the discussion and fixing -- the correction -- of specifics while discussing them. Taking one or two at a time and correcting them before going further.

What is your view of today's Russia? - Mixed -- once again. It's hard to call Putin a great democrat!!! And there are many undemocratic things going on. But two things: once again, the U.S. role -- which couldn't be worse! -- creates major problems for all countries -- Russia included. And, I at least have the feeling, that full and open discussion on all problems would once again rally millions. Yes, and discussion on both the early damp of the USSR as was as what went wrong -- and what went right. Just like the people of the US, the people of the former USSR -- have a lot of work ahead.