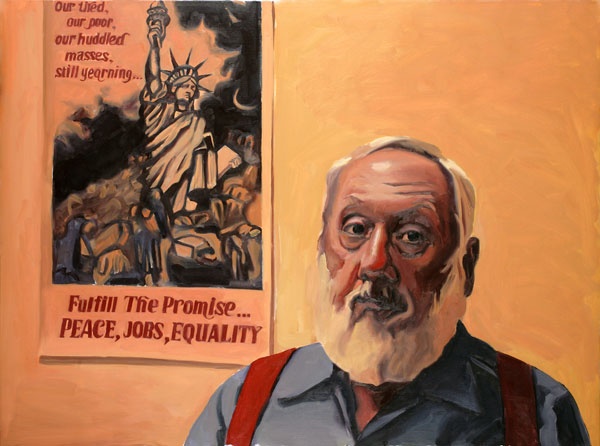 Bill Davies. "Born in 1942 in upstate New York, the oldest of seven children. My Father was a sheet metal worker; my Mother was an office worker. I attended the local centralized school from kindergarten through high school and graduated from Columbia College in New York City. I started work with the New York City Department of Welfare (later Social Services), where I participated in a one month illegal strike. Soon afterwards I was drafted into the army for two years. It was during the Vietnam war, but I was sent to Germany. After my military service I returned to my job and married Joan Feder. I also began seeking a political organization which would deal with the social and economic inequities and problems I saw in the U.S. I joined the Communist Party, USA in 1971 after meeting comrades active in my union. My Daughter, Angela (whose namesake was then in jail) was also born in 1971.

I continued to work for different subdivisions of the Department of Social services through several reorganizations and name changes, and to be active in my union (AFSCME Local 371) and the Party. I was elected shop steward from my work location, to the local's Executive Committee and one of the local's Delegates to the NYC Central Labor Council. After I retired in 1995 I became a full time volunteer for the Party. As a Party member I have previously been a Delegate to National Conventions, a member of the National Committee and National Board, and several New York State positions, including District Organizer. I currently manage the Party headquarters building. In personal terms, the death of my wife from cancer four years ago was a severe blow which also affected my political activity. I must say that the understanding and support of Party Comrades helped get me through it, and I have become more active in the recent period."

What is your view of the former Soviet Union? - The Soviet Union was a magnificent experiment which changed human history. In my opinion, it will be seen in the future as a milestone in human history, indicating that socialism is both possible and necessary for human society. Even now 1917 indicates the beginning of the era when socialism exists in at least one country. Also, the Soviet Union's contributions to national liberation struggles enabled them to become a major factor in world history today. The Soviet Union also made some remarkable gains in the living standards of people who started out far behind as well as some important scientific and technological contributions to the world. This does not mean that the Soviet Union was perfect (no human society is, even in its own terms) or that no mistakes were made. In fact, I am not convinced that the destruction of the soviet union was inevitable, although I do not minimize the role of imperialism in bringing it down. What I think the Soviet Union needed was more democracy and better ideological education, which would have made the Soviet Union "belong" to the people more (both in reality and in perception). It seems to have been a critical failure among a number of real successes, and I think that is what produced the resulting failure of the peoples there to fight for what they had.

What is your opinion of Mikhail Gorbachev? - I will not speculate on his motivation, which in historical terms is not important. Whatever his reasons, the results were that he caused immense damage to social progress.

At first, it seemed that he was going to correct some of the mistakes and errors, particularly in making the Soviet Union more democratic. He soon lost his way, and even began voicing the ideas of those who wanted to return to the old-fashioned, pre-Revolutionary past. What he said against women's equality is a striking example of that.

I have never clarified my thinking about the origins of the failed "coup." Whether it came from the left or the right, it certainly aided the right, and provided excuses for dumping socialism. When Gorbachev abolished the Communist Party (how democratic was that?) he left the country ripe for picking by anti-socialist forces. Up to that time, there was still hope to move toward solutions.

What is your view of today's Russia? - There is a lot I do not understand. I do not understand how working people accept losses of their standard of living without more struggle. In most parts of the world, even under very repressive conditions, workers who did not get paid would engage in sit down strikes and similar struggles. Cutting pensions would be a fighting issue for all workers, not just pensioners. I do not understand how Communists and former communists can stand for, and even promote, the ugliness of national chauvinism and other divisions when unity in struggle is needed so much.

I do not understand how the people let themselves be ripped off by the few who stole the wealth of the country or how they tolerate the rapid increase in inequity since socialism was destroyed. Even if they felt that the Communists ran a system which was unfair to people, it is obvious that the current system is less fair.

I do not understand the sort of thinking that seems to be based on ideas that capitalism is the best (or only possible) system when a broader, longer term view would contradict that. (I guess I give the benefit of the doubt to people from other countries which have never had anything else.) Even if only a small number of people are now thinking about these questions, why is there not a united Communist Party putting out those ideas?

I do not understand how much longer the restoration of Capitalism can last, given the world prospective for it and given the fact that there are survivals of socialism in Russia's social structures and in the thinking of the people.