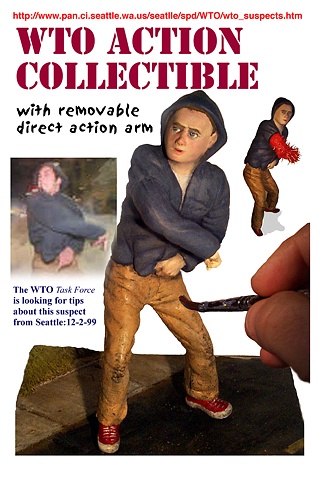 Gregory Sholette: DIY Counter-WTO Action Figure with Spring Action Arm
poster based on miniature figurine with street tableau based on Seattle demonstrator whose picture is posted on a web site wanted list
variable dimensions
< previous next >

"Action figures": Somewhat like three-dimensional zines, garage kits are small edition, amateur sculptures and dioramas circulated by devotees of particular films, or hobbyists interested in replicating specific historical, military or maritime events. They range from scale models that attempt to replicate their subject matter precisely, to tableaus and figures reflecting flights of fantasy. Sold as kits for home assembly they frequently skirt copyright laws. Cultural critics such as Walter Benjamin and Roland Barthes have argued that today the most ephemeral, sentimental even amateur forms of cultural production often reflect contemporary society more precisely than the work of fine artists. Such “base” forms as comic books, pulp novels and ‘B’ movies might be said to apprehend a realm of everyday expression that “high” art typically obscures including the desires, nostalgia, and fantasy of those who labor at routine jobs, day in and day out. In a sense, these modern mementos could be said to make up a hidden sphere, one that parallels and sometimes thieves from the more familiar sphere of private commercial culture and in order to counter, or attempt to do so, the alienating effects of modern life. My aim is to borrow aspects of this DYI art-form and “re-tool” it for purposes of social critique and political reflection.

Gregory Sholette is an artist, writer, and an Assistant Professor of Sculpture at Queens College. His sculpture and mixed media works have been exhibited at the Taipei Biennial, Periferic 8 biennial in Romania, the Smart Museum of Art in Chicago, New Langton Arts in San Francisco, and the Dia Art Foundation, Anthology Film Archives, Apex Art, and the Museum of Modern Art in NYC. A founding member of the artist's collectives Political Art Documentation/Distribution (PAD/D: 1980-1988), and REPOhistory (1989-2000), he is the co-editor of two books, Collectivism After Modernism: The Art of Social Imagination after 1945, (University of Minnesota, 2007); and The Interventionists: A Users Manual for the Creative Disruption of Everyday Life, (MASS MoCA/MIT Press, 2004, 05, 08). At present he is working on a book about “dark matter” and the political economy of art for Pluto Press, and has recently co-edited a special issue of the journal Third Text with theorist Gene Ray on the theme "Whither Tactical Media."