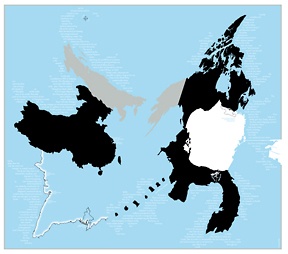 Mappa mundi is part of an ongoing project that explores two kinds of popular representations of the World‹the iconic world map and the international spectacle of World¹s Fairs. As technology and commerce blur more and more geographic boundaries, the ubiquitous world map becomes inadequate to describe the intricacies of globalization. Mappa mundi is an attempt to remake the world map, relying on associative geographies rather than physical ones.

These experiments within the confines of the specific form of the world map reconfigure it to create new geographies which represent contemporary global situations. Familiar borders are denied, and new connections between places are brought to the surface. This map mash-up is more conducive to narratives of globalization, but more difficult, disorienting.

Mappa mundi draws relationships between the 1915 San Francisco Worlds Fair; the Panama Canal; the Northwest Passage in Canada; a mothballed naval fleet in the Suisun bay near San Francisco; shipbreaking sites in Pakistan, India, Bangladesh, and China; and the North Pole. These are linked by common narratives of shipping, sovereignity, commerce, and exploitation (of resources and people). The map plays with scale‹cities are rendered as large as nations; an archipelago of decommissioned ships links one place to another, one part of the story to another. Mappa mundi refers to medieval world maps that sometimes conflated real and imaginary geography, made at a time when the complete picture of the physical world was still being formed.

Lize Mogel is an interdisciplinary artist who works with the interstices between art and cultural geography. She inserts and distributes and cartographic projects into public space and in publications. She is co-editor of the book/map collection "An Atlas of Radical Cartography" and co-curator of the internationally touring exhibition "An Atlas". Exhibitions include the Gwangju Bienniale (South Korea,) common room (NYC), Casco (Netherlands), and ³Experimental Geography² (ICI, touring).