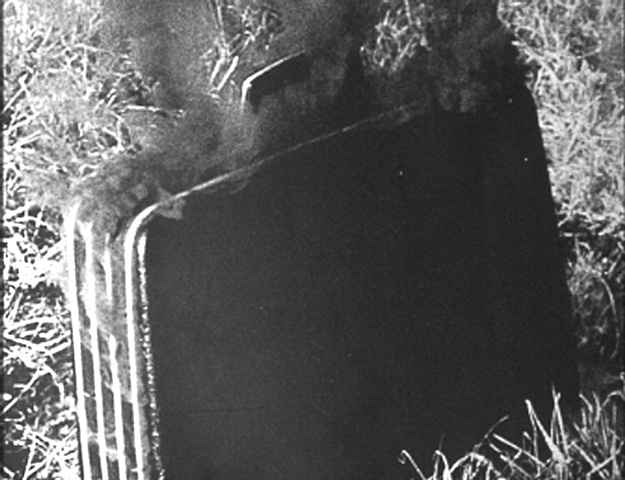 Nine years in the making and shot on location in Miami, Florida and Havana, Cuba, The Subversion Agency relates the exploits of an American arms dealer (Pierre Kozlov) who is invited to the K-Zone –– “a communist country somewhere in the Caribbean” –– to participate in a one-on-one golf match for one million dollars (winner take all). A self-confirmed nihilist, Kozlov becomes embedded in a morass of international politics when he discovers the prize in store for the loser, which he appears destined to become. Boswell's K-Zone Republic, "formed circa 1960 during a staged soccer riot in the K-Zone capital," is awash with two-bit politicians, American black panthers on the lam, anarcho-pranksters on the underground airwaves, double agent feminists, and a golf champion formally convicted of “cultural parasitism.” Threatening the narrative of the film, a Brechtian blitzkrieg of missives take form through experimental montage, double jump cuts, over edits, and aural asides that crackle with political satire and hard boiled sarcasm. Combined with Boswell’s on location footage, the film's re-contextualized archival images of Miami and Cuba work to create a fictional netherworld reminiscent of the Twilight Zone.

Mark Boswell studied film & film theory at various institutions in Switzerland, France, Germany, and the U.S. from 1986-1992. His experimental media art works have been screened internationally in over 25 countries in museums, biennials, and film festivals, including The Transmediale Berlin, The 10th Biennial of The Moving Image, Geneva, National Center of Contemporary Art, St. Petersburg, Russia, Artists and Arms Show, Moscow, The Avanto Media Arts Festival, Helsinki, The Los Angeles Freewaves Biennial, The Hammer Museum, Los Angeles, The Image Forum Festival Tokyo, and the Chechnya Emergency Bienniale. In 2004, He was awarded the “International Media Art Award” from the ZKM Museum of Karlsruhe, Germany. His 2003 feature film “The Subversion Agency” received the best experimental feature film prize from The Denver Underground Film Festival and a “Director’s Citation” from The Avanto Media Art Festival in Helsinki. He is currently visiting faculty at the San Francisco Art Institute and the Ringling School of Art.