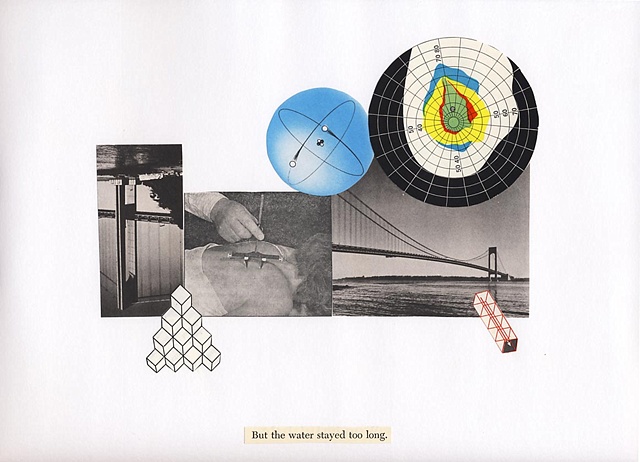 Pablo Helguera: But the water stayed too long
collage
8x10"
< previous next >

The Artlington Heighs Suite is a series of 150 collages made between 2007-2009. The title refers to a suburb in the city of Chicago where some of the artist's family lives and where some of these pieces were made. The works are made from fragments of images from scientific and educational textbooks, mostly from the 1950s and 60s, along with a series of seemingly disjointed texts below that constitute a fragmentary illustrated novel of sorts. Aspects of the biographical, the fragmentation of memory, and general aspects of family and personal relationships are a main topic of this series.

Pablo Helguera (Mexico City, 1971) is a New York based artist working with installation, sculpture, photography, drawing, and performance. Considering the relationship between history, cultural production and language, Helguera fictionalizes the real, generating commentary and discussion about our surrounding cultural reality and relationship to time. His work often adopts the format of the lecture, museum display strategies, musical performances and written fiction. His work as an educator intersected his interest as an artist, making his work often reflects on issues of interpretation, dialogue, and the role of contemporary culture in a global reality. Helguera’s work is part of the permanent collection of El Museo del Barrio, New York, an institution where he has presented a variety of projects through the years. Helguera has exhibited or performed at venues such as the Royal College of Art, London; 8th Havana Biennal, PERFORMA 05, Havana; Shedhalle, Zurich; the Museum of Modern Art /Gramercy Theater, New York; P.S.1 Contemporary Art Center, New York; Brooklyn Museum; IFA Galerie, Bonn; Tokyo Metropolitan Art Museum, Tokyo; MALBA museum in Buenos Aires, Ex-Teresa Espacio Alternativo in Mexico City, The Bronx Museum, Artist Space, and Sculpture Center. His work has been reviewed in Tema Celeste, Art in America, Artforum, NY Arts Magazine, ArtNews, amongst others. In 2008 he was awarded the John Simon Guggenheim Fellowship and also was the recipient of a 2005 Creative Capital Grant.