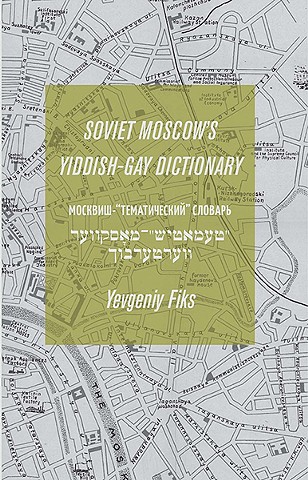 This book attempts to draw connections, at times contradictory and counterintuitive, between two marginal communities in Soviet-era Moscow – Jews and gays – in order to reflect on the (dis)similarities of their oppression, identity, self-irony, and practices (or hypothetical practices) of solidarity. This imagined dictionary for Soviet Jewish-Soviet Gay communication is a project that resists oversimplification, forced universality, and the erasure of difference when it comes to the Soviet experience and the Soviet subject.

This book is an artist’s project and not an academic study. I am not a linguist and although I am personally part of both the gay and Jewish communities of Moscow, my “Moskvish” and my “Tematicheskiy” are far from fluent. My work here is a combination of research, translation, transliteration, and fiction. It is a personal gesture and I own and embrace my grammar mistakes and mistranslations as organic to the construction, and lived experience, of my own identity.

I am not seeking equivalencies between these two unique and historically different communities on the margins of Soviet society. What is important is not to equate Soviet Gay and Soviet Jewish culture, language, and experience, but to see them in relation to one another. If the goal of a dictionary is to facilitate understanding between speakers of different languages, then the goal of this particular dictionary is solidarity.

Get the book here.