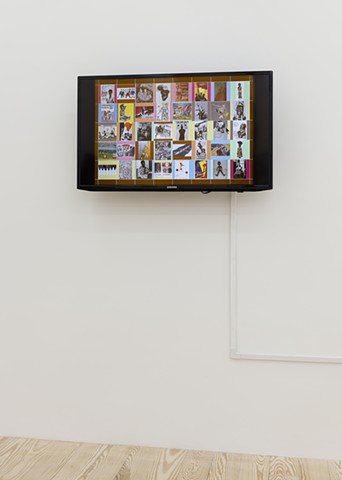 (CATEGORY - A group of People or Things That Are Similar In Some Way) (Origin: Late Latin categoria, from Greek kat&#275;goria predication, category, from kat&#275;gorein to accuse, affirm, predicate, from kata- + agora public assembly, from ageirein to gather) This project will reverse into the Wayland Rudd archive itself, re-categorizing its contents. This process of sorting will reflect or perhaps break down the categorization of people it documents.The re-sorting will take the form of a game-like animation, following the type of game half the people are playing on their phones on the subway to work; you sort colored shapes and the groups that match disappear, scoring rewards and allowing others to move into their place. I have based my animated adaptation on the latest version of this game, the wildly popular ‘Candy Crush’.

BIO: Jenny Polak comes from England; her art simulates ways for people to survive hostile authorities. She studied architecture as well as art and her projects are often site/community responsive. She has created site-specific projects for the Griffiths International Sculpture Garden, Rome NY, Exit Art, NY, the Rotunda Gallery, Brooklyn, Soap Factory, Minneapolis and the Internet among others. Her work has been discussed in books and publications including the New York Times, the Newark Star-Ledger, the Guardian (UK), Brooklyn Rail, and Bad at Sports. Support includes NYFA, the Graham Foundation for the Advanced Study of Visual Art, Franklin Furnace and residencies at Northwestern University, Newark Museum, Lower Manhattan Cultural Council, and the Lower East Side Tenement Museum.