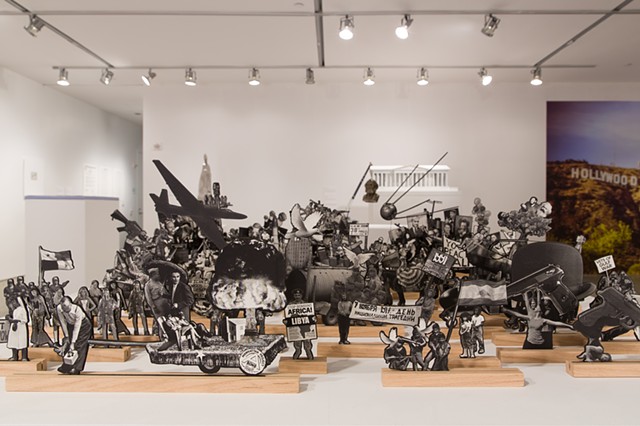 collage on cardboard (models for a parade) dimensions variable

Acknowledging the inadequacy of monumental sculpture/architecture to represent complex, multilayered ideological warfare (understood as a global chain of signs, diplomatic postures, and proxy wars between super powers) Camel Collective proposes to establish an annual tradition: a Cold War Parade to be held in Norfolk, Virginia, and San Diego, California. Based in cities that serve as critical military command centers, the parade will include various signifiers of historical moments in the history of the Cold War, such as a float dedicated to South American guerillas and US and Soviet astronauts; and a Berlin Wall float cycling through construction and collapse. Local populations from both sites will participate, appealing to diverse ideological viewpoints and local (military) contexts through humor, satire, and hyperbole. The parade also creates the possibility for a Cold War Veterans march, and for consciousness to be raised about Cold War activities beyond mere cultural signifiers.

Although festive and performative, the Cold War Parade is colorless; all costumes, floats, and signage will be produced in shades of grey. This neutralizes and equalizes the colors (flags) of the two super powers rendering them equivalents in mutual deterrence, where the very notion of “victory” is postponed. The photographic tonality of the parade signifies its documentary nature, leaving open the question as to what a monument for the Cold War might mean in the present.