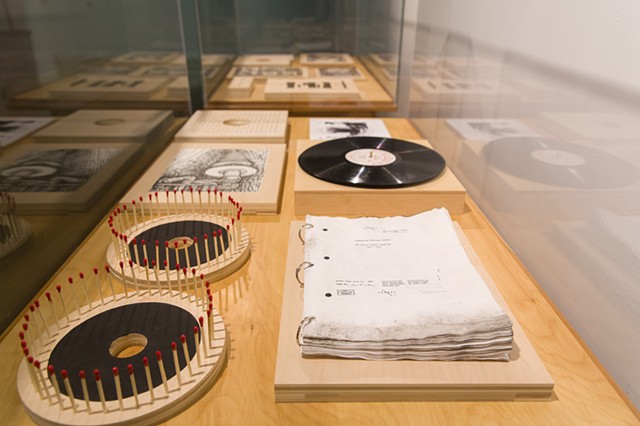 Match-Making in the Tunnel of Love
< previous next >

Between 1954 and 1955, the CIA dug a tunnel from West to East Berlin, for the purposes of tapping into Soviet phone cables. While the KGB had been informed of the project from the start (by a mole in British intelligence), they waited two years to break the news to the international press, which marveled at the CIA’s “clandestine” maneuver and coined the moniker “Tunnel of Love.” Chavchavadze, the daughter of a CIA operative of Russian/Georgian heritage, has spent over a decade exploring visual forms to better understand and express the Cold War. One of her central elements is the ubiquitous wooden match, a disappearing artifact that physically and linguistically suggests the Cold War’s volatility and adversarial symmetry. Presented here is her research for an intimate, match-encircled monument: a twenty-five foot long, seven inch wide wooden pipe lined with steel and lit from within, suspended in a semi-darkened room. Two chairs are placed at opposite ends, enabling visitors to listen, look, spy, or speak into the pipe, which transmits and enhances voices. Periodically blocked at each end by moving mirrors, the pipe creates both intimate moments and abrupt disconnections.