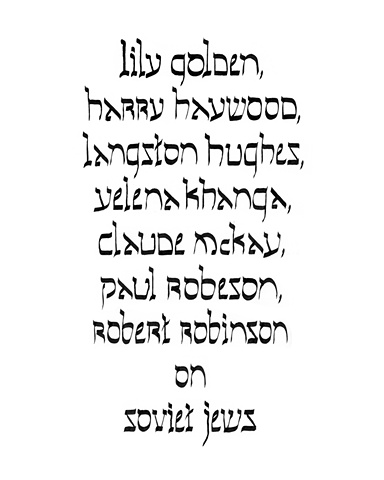 The project Lily Golden, Harry Haywood, Langston Hughes, Yelena Khanga, Claude McKay, Paul Robeson, Robert Robinson on Soviet Jews traces the history of the Jewish community in the Soviet Union between 1920s and 1980s via memoirs of Soviet citizens of African American decent and African Americans who resided or visited the USSR.

This project is based on writings of a diverse group of individuals, who range in terms of age, class, place of birth, occupations, political believes, and time of arrival and time spent in the USSR. Among them are writers Claude McKay and Langston Hughes, singer and activist Paul Robeson, Communist leader Harry Haywood, music historian Lily Golden, journalist Yelena Khanga, and tool-maker and engineer Robert Robinson.

This diverse group of historical observers present a variety of accounts of the situation of the Soviet Jews. Some writers have positive views of Soviet achievements in the area of equality. Their writings evoke that the Jewish question in the Soviet Union was successfully resolved, and that it can provide a model for African American integration back home. The majority of the accounts, however, narrate about the continuing presence of anti-Semitism in Soviet society, notwithstanding the official decree and stemming from the tenants of the Communist ideology of internationalism and non-discrimination.